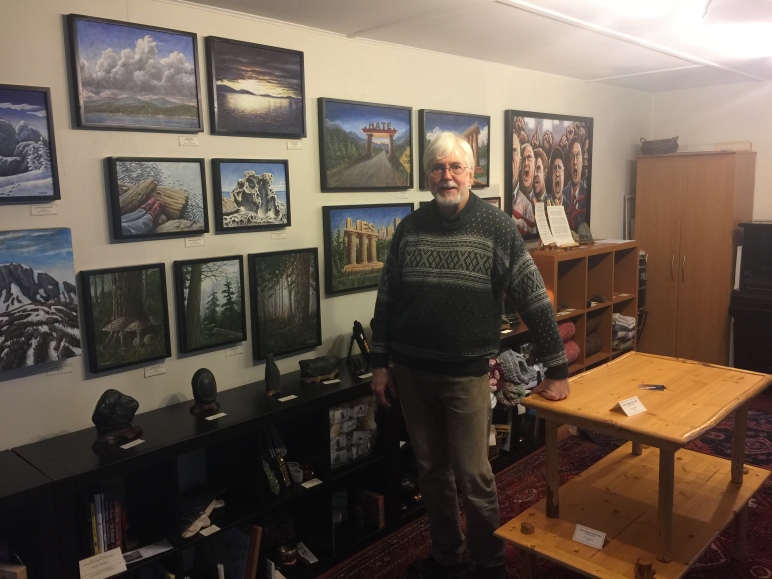 It’s currently Nov. 26 and I am sitting in a café in Kitsilano. We are experiencing our first strong autumn storm, which has arrived – not unexpectedly – to the Pacific Rain Forest in which we live.
Our last art exhibit of the year showcases the talents of island artist Bill Maylone who has adorned the walls of Shavasana Gallery with a beautiful display of oil and acrylic paintings. Bill’s show is titled “Landscapes”, which he explains thusly…“Everyday through life we navigate landscapes, geographical, political, mental, emotional, and metaphorical” , and indeed, his paintings reflect these varied landscapes through which we all must tread. From bold mountain vistas, ominous skies and quiet glades Bill juxtaposes these

appealing images of the natural world with a darker glimpse of human nature. Bill has also created a collection of six paintings graphically illustrating his deep concern for the troubling political shifts toward fascism that we are witnessing around the world right now…

Angry men and women bringing their message of Hate, Lies and Ignorance – depicted as temples of intolerance in Bill’s provocative work.
The Opening Reception was held on November 24 and was a well-attended and fun event. Great food and conversation and a chance for many Mayne Islanders to get out and see Bill’s newest work. He also brought a gorgeous and Zen-like collection of Suiseki rock displays which were garnering a lot of admiration by the crowds. Here’s a little walk-through video which shows all of Bill’s work:
https://youtu.be/O-ukQLXof7c
As well, I have a little bio of Bill, which will give you an understanding of the landscapes through which he has journeyed …
“Bill Maylone developed skills as an artist through an eclectic thirty-year career planning and creating animated films, CD-ROMs, websites, and other visual media. His work has been seen on television, in feature films, planetarium shows, museum installations, and magazines. Self-taught as an artist, he sharpened his skills in painting, design, animation, and 3-D fabrication through work in professional productions.

He made his first animated movies as a kid in the late 1950s, and in 1975, the National Film Board spotted his work and helped launch his professional career.

His 1981 NFB animated short, “64 Million Years Ago”, featured naturalistic stop-motion models of dinosaurs that helped define the vision of prehistoric life for a generation of Canadian school kids. Over the last two years, this film has tallied over 600,000 views on YouTube. “Look Again”, the six-film live-action series he created to promote critical thinking in primary school students, won more than a dozen international awards and was the NFB’s most successful educational title in 1991/92. Footage from his first 16mm production, “The Gift”, has just been featured in the latest music video by the Canadian rock band, “Mounties”.

His work is often topical. “Autosaurus” and “American Excess”, two animated productions he directed for Adbusters Magazine, gained international attention in efforts to discourage automobile pollution and consumer waste. His approach to graphic and educational design resulted in several awards and top-selling multimedia programs including, “Defining Canada: Active Citizenship for the 21st Century”, and “Making History: Louis Riel and the 1885 Rebellion”.

In the five years before moving to Mayne Island in 2003, he was an animator on “Gary and Mike” (a raunchy half-hour TV series aimed at teenagers); an artistic consultant working with artists from the ‘Namgis (Nimpkish) First Nation on a project to teach Native language; and the co-director/animator of an interactive dinosaur installation at the Philadelphia Academy of Natural Sciences. On Mayne, he edited and laid out the local magazine for over four years.

In the 1980s and ‘90s, he instructed animation, film, and media courses at Emily Carr College of Art and Design, the University of British Columbia, and Capilano College.

He now develops his property on Mayne Island, and paints, carves, and practices Suiseki, the ancient Japanese art of stone display. His art demonstrates an appreciation for the natural world, and much of it continues to have a strong political bent. His exhibition at Shavasana examines different kinds of landscapes in oil and acrylic paintings, small carvings and other woodwork, and Suiseki.

Bill loves his pet rabbit, but wisely, he doesn’t go in for rock climbing like he used to.”

“Landscapes” runs until December 16 – please drop in for a chance to enjoy Bill’s show!